It's never too late to do the right thing ... and engage

Some of you may have followed by tribulations with my local transit system (#oakvilletransit) ... I've tweeted often about them and most of it has not been favourable.


I even highlighted their lack of engagement and failure to monitor social media in a previous blog post ... I must now say that this failure has been corrected. Since then, I've been contacted, first by the Town of Oakville (which is now very responsive to tweets from residents) and then by Oakville Transit itself.


That belated engagement culminated today with a real-life meeting with their boss and his chief planner ...I must say I was impressed. They took the time to listen to me ... hear my concerns, showed me how they were being addressed and outlined the challenges they are facing in terms of service improvements and fiscal restraints.


I got a tour of their very impressive facility (which includes catching rain water and recycling it to wash the buses ... part of their LEED build ...) ... They have a fantastic looking control room with the latest tech (a huge video wall ...GPS technology to track their fleet ... and much more). They'll soon be able to provide real-time info on services to their clients, on mobile devices so passengers know exactly how long they have until the next bus shows at their bus stop ... again, very impressive ...as is their simulator where new drivers are trained: 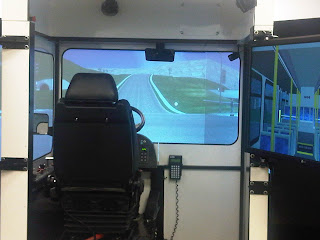 So, some lessons learned in all this ... first for agencies, governments and private sector organizations:


For clients/users/critics:
Now, good on Oakville Transit for hearing me out ... helping me see the bigger picture about the different pressures they're under to offer this important public service ... will I stop criticizing them if they don't perform ? No.  Will i be less inclined to do so because I know what they face? Perhaps. Will I note their improvements? Certainly ...

This whole episode has again revealed the amplification nature of social media ...whether people are reacting to your response to a disaster or a crisis or commenting on the service you offer ... things are not done in a vacuum anymore ... EVERYONE has an audience and an influence ...
Posted by Patrice Cloutier at 2:56 PM