Let me first say that I'm a great supporter of law enforcement officers. I have helped train many in crisis communications and social media practices. I worked closely with some of the most professional planners and strategic thinkers from different police agencies while we were preparing to secure the G8 and G20 summits in 2010.

Police adapt to the changes society brings because they are part of the social fabric. Woven into this fabric are brand new "threads" that are expanding the elasticity of our collective construct. Social networks are the latest in the human race's efforts to share, commiserate and help out when incidents/disasters occurs ... or when drama unfolds.

So trying to ban or circumscribe their use is futile at best, and most certainly misguided. It's as useless as a local sheriff trying to restrict the media's ability to show damages caused by wildfires such as was the case in Colorado last year.

So now, in an era where Twitter is a constant news feed for breaking events, trying to deny it's use is both senseless and counter-productive. People crowdsource the news. They are their own broadcasters. 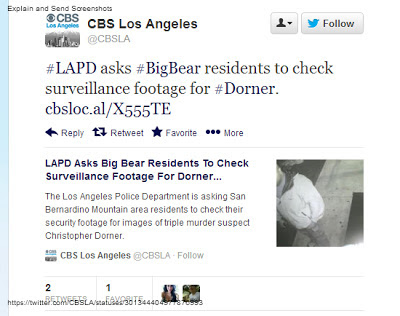 Shutting them down or reporters tweets, is not the solution. This particularly applies when authorities are crowdsourcing a manhunt themselves.

So, you're asking the public's help ... through the media and then turn around and say: "oh well, you shouldn't tweet about this ..."?

This is what you end up with as a reaction: (from @CalFireNews)
#LAPD wants ##twitter turn off all # Dorner hastags replace with just a happy face :) #NothingToSeeHere #MoveAlongNow

It's perhaps a bit of an extreme reaction but that sense of ridicule was widely shared on Twitter and other social networks. It was in reaction to this: Okay, it might make perfect sense to worry about officer safety. But this tweet shows a total misunderstanding and lack of knowledge of how people use social networks. We don't wait for the media ... we ARE the media ... we'll retweet, share, post what we witness and experience ... media or not.

Unless your normal fugitive is on the lam with a full fledged social media command centre while trying to avoid capture ... I doubt he's keeping an eye on a Twitter stream which sees hundreds, if not thousands, of tweets every minute ... So it's a bit counter-productive to focus efforts on social networks.

Much more worth it is using social networks to tell your story.

Yes, each of us has some responsibility and accountability to shoulder about what we share in a crisis ... Social networks have brought about an era of higher expectations about openness and transparency. Going against the grain can expose you to some unnecessary criticism ... and the most outlandish of conspiracy theories.

Posted by Patrice Cloutier at 8:32 PM