When the spokesperson becomes the story: you have failed!

I have a new favorite hashtag on Twitter : #SpicerFacts ... it's full of witty comments and memes on the astoundingly stupid media relations strategy adopted by the new White House and its Press Secretary, Sean Spicer.

No matter where you stand on the Trump presidency ... their approach to communications is worrisome and troubling. It's also just plain stupid :

Patrice Cloutier@patricecloutier#SpicerPeriod has a sign interpreter at his briefings to translate from "stupid" ... into actual English #SpicerFacts

Here's a few reasons why it's stupid. The new spokesperson:

So, Spicer became THE story ... a spokesperson is supposed to be just that ... a mouthpiece relaying key messaging ... the focus should be on the message and not the messenger.

For Spicer, that notion seems lost as he was intent on attacking journalists and news organizations. That approach is still not effective even if they're just using the media as a foil to placate their base. In fact, it was a huge misjudgment.

In an era of low trust (actually almost non-existent for government) ... it's self-defeating because government and media are equally distrusted in the US according to the recent findings published in Edelman's Trust Barometer.

It's also troubling ... worrisome ... perhaps even dangerous ... to adopt such a posture towards the media and a vast segment of the public. 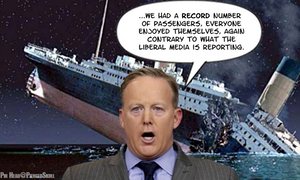 If you have no trust capital ...how will you be able to influence the public and the media when it matters most ... when a crisis or nation-wide disaster hits?

By degrading any aura of authority the public might perceive, you minimize your ability to influence behaviours, convince the public to take appropriate actions to protect themselves during events/incidents such as a flu pandemic, a dirty bomb explosion or some other terror attack.

It also reflects poorly as President Trump tries to establish his image/public persona as Commander-in-Chief ... (attacking the intel community is not a good way to do that ...) One has to hope that the current or former Marines in his national security team can set him straight ... at least we know THEY are not traitors ...

Ultimately, this kind of public posture, based on "alternative facts" is doomed to failure or even worse, might cost lives. 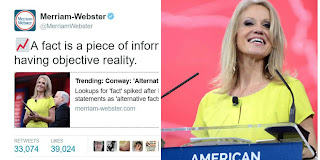 One thing though ... you have to be somewhat impressed by the bravado displayed by the Trump gang ...comes from the Fibber-in-Chief himself ... and trickles down ( sorry for the bad mental image that evokes ... ) to his key aides. 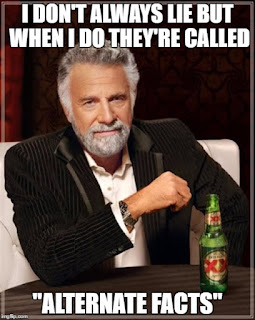 I'm not in the US ...but I wish all my American friends good luck over the next four years ...In fact, we might ALL need it.
Posted by Patrice Cloutier at 4:29 PM