When the boss is the wrong spokesperson in a crisis

One of the most cited principles of crisis communications is to have the "guy in charge" ... your CEO or senior elected official become the face of your response. Most often this approach will work. People who get to the top drive the agenda, know how to seize an opportunity.

NOTE: skip to bottom to see tips on how to help make that happen

And, there's the other guys (or gals !). The leaders who can't handle a crisis in the right way. When that failure by the CEO become another crisis, things get real dicey for crisis comms practitioners. Their arrogance dooms them to failure because they don't realize they are not prepared or trained in crisis comms.

Few would dispute that the current White House is close to a state of apocalyptic chaos. From a communications perspective, it's one bad day after another. The Press Secretary is a bumbling buffoon ... and today, his boss #POTUS proved again he's totally unhinged and unfit for office. Yet, he's the boss and took his show front stage.

The reaction was immediate and not flattering: 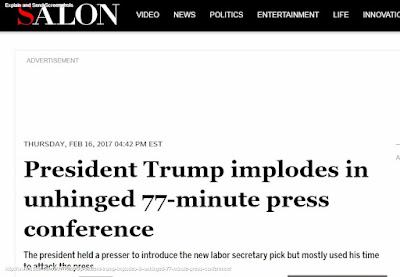 Obviously, the Donald has no ability to stay on message or to look prepared. We shouldn't be surprised. His debates against Hillary Clinton were of the same ilk.

So, if the boss can't be relied on to be prepared for planned events, how can his own people have confidence in how he/she will react in a crisis? Truth is they don't. It's likely the whole thing will be a train wreck.

Which brings me to another boss who made things worse for his company: Edward Burkhardt. One of his train devastated a small Québec town, killing dozens. That's bad enough. His mishandling of the communications aftermath made the pain even more unbearable for residents and those who lost family and friends in the tragedy.

So, what's a communicator to do? Here's what I wrote a few months ago:

Here are five things that can help:

And , here are five more tricks you can try:
T: as in Train ... practice, involve senior leadership in drills or mock scenarios
R: as in Rehearse ... improvising at the podium is not a good thing
U: as in Unite ... bringing people together in a crisis is key ... dividing is unproductive
M: as in Moderate ... your CEO's ego by controlling the setting, providing messaging
P: as in Pace ... a marathon press conference = disaster. Parcel out interventions

You still have the choice to bail if the captain keeps steering the ship towards that iceberg ...
Posted by Patrice Cloutier at 6:44 PM