The UK riots, mobile technology and social media: some thoughts

As I write this post, I still have fresh memories of the movie "Rise of the Planet of the Apes" in my mind which I saw with the kids on a rainy Tuesday afternoon. One quick comment is that the rampaging morons in London, Birmingham and other English cities look a lot like the simian hordes in the movie.

A few observations come to mind in wake of the #londonriots (see that hashtag on Twitter): 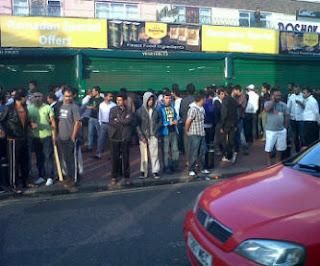 I'm sure the next few days will bring even more keen observations from all around ... What do you think?
Posted by Patrice Cloutier at 8:26 PM