What will matter to crisis communicators in 2013

Just a few days ago, I wrote about key factors that will have an impact on the professional lives of emergency managers this year.  If I had to add one more, the sixth factor would be a pandemic type of emergency (flu shot anyone ?).

But now, I'd like to take a look at some of the issues that come up more and more frequently in dealing with the communications aspects of any crisis or emergency. Again, these are all linked together by the changes brought about by social convergence.

The first is the ability to put in place a solid social media listening operation. This is not as difficult as it may seem. A lot of attention has been directed at sophisticated operations and set ups. The American Red Cross, Dell, the recent Consumer Electronics Show, and others, have superb operations in nice, well-equipped centres. 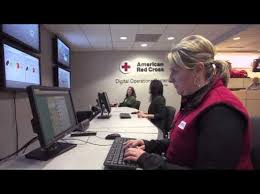 You can do it as well ... on a smaller scale ... one that fits your needs. The first thing is to take the time to do it in routine situations ... a part of your normal day at work. 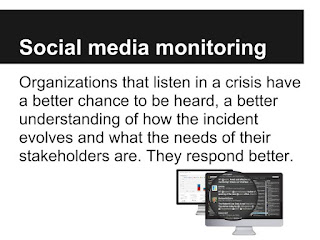 Doing it daily, combing through a RSS feed, monitoring Twitter regularly, adds to your business intel acumen and positions you well when you need to ramp up when a reputational threat is detected. Here's how you can go about this.

Having an ongoing social media monitoring activity will help you stay abreast of developments in your fields and may give you a chance to detect crises BEFORE they happen. 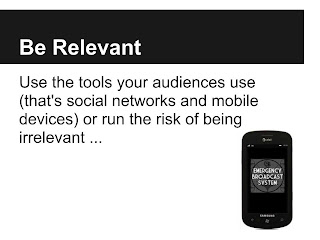 The second issue that will present itself to crisis communicators in 2013 is to ensure that their plans are "socially convergent".  This means ensuring that you're relevant in your response to a crisis and reaching the right audiences.

Social convergence is the combination of social networks and mobile technologies. You use it or run the risk of being ignored. 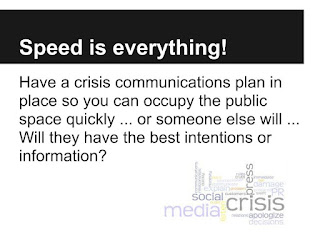 Being "socially convergent" in your crisis communications response gives you the ability to act with speed. Not hurriedly, but a practiced fast execution.


Also, does your plan identify the traditional/legacy media as your primary audience or distribution channel? If so, that's a failure point. 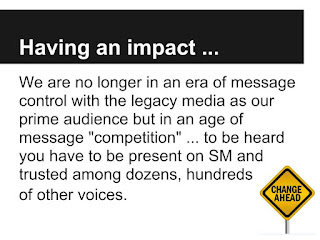 A key failure point that is still quite common is the belief that organizations can still "control the message". That's a relic of a bygone era of the news cycle and cozy relationships with professional journalists who could "sit" on a story if they were given something in return.

How does that work in a world where news breaks on Twitter and Youtube ... where citizens are reporters and the news cycle is NOW ... 24/7 ?

The third issue that could haunt some PR and crisis comms pro this year is "brandjacking" or people pretending to be YOU and engaging with your constituency.  This can happen in a variety of ways:


Although all these can bring devastating consequences. You can help prevent these social disasters and recover from them. My good friend Jim Garrow even says such events and other social media gaffes are "survivable" ... But in some cases, you need to hit the "reset" button ... Just ask General Mills.

The fourth issue will be for crisis communicators to find the right tone and the right opportunities to defend against reputational threats.

We have the chance to observe an ongoing case study in crisis communications these days. The US National Rifle Association (NRA) continues to defy logic and every single rule of crisis comms. They have chosen to play for their own audience and damn everyone else who doesn't agree with them.

It works only if you really don't care what your competition thinks ...if you believe your constituency will follow you in a cult-like manner ... but for most, it's a surefire recipe for disaster and, eventually, their own demise.

Crises come and go in an instant (in an Instagram ??? ), adopting the right tone and the right moment to launch an counter-offensive and defend your reputation is critical. This begins with knowing your audience, their needs, their perceptions and worries.

Finding the right tone is important. Communicating during a crisis cannot always be about doom and gloom. Humour, used parsimoniously and with some tact, can go a long way in making your audiences see the proverbial silver lining.  This was the case with Newark's Mayor Corey Booker in the aftermath of Superstorm Sandy. Accompanied by solid, personal engagement on social networks, this humanizes your response.  What doesn't work ... is trying to benefit from the discomfort or misfortunes of others.

More often, a crisis calls for a somber response, particularly if your spokesperson has to do media briefings under the glare of dozens of cameras. Very few people can do that with grace. In the recent school shooting in Connecticut, the State Police could count on the presence of such a pro and it made a difference. Finding the right person for the job is a challenge in itself.

In many cases, the CEO or President is not the guy/gal ... One tip, you don't walk off during an interview ... well, in most cases ... Some news conference tips here. 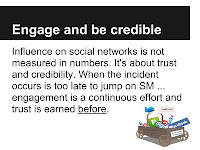 In the end, it's fairly simple ... your credibility depends on your ability to detect issues, engage with the right audience by using the right channels and tone. Nothing beats being trusted ... people will actually come to your defense when your organization is attacked. 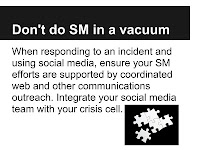 Remember that social media should be part of an array of tools used to respond to reputational threats and crises. The people handling that aspect of your response need to be included in your planning and your posture on social networks needs to be integrated in your overall outreach. 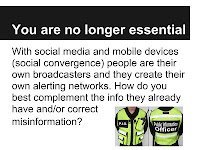 Finally, being socially convergent is absolutely necessary. Simple fact is that people don't need you at all to make their own impression. They get their info from many sources ... base their perceptions from their online networks ... ignore that and you won't like the results ...
Posted by Patrice Cloutier at 2:00 PM