I've taken part in a many exercises and a few real-life incidents. One thing that seems consistent in the hotwash and debrief following each of those is this: communications (meaning emergency info) could have been better.


So after each one of those, we go through the same thing: lessons learned, corrective action plan, etc.
But in reality, there seems to be very little change, I'm wondering if that's because emergency information (EI) and PIOs are kind of tolerated in a disaster, seen more like a nuisance.


I'm overstating this sentiment of course, but while most people do subscribe to the big role played by comms in relations to preparedness, still very few emergency management plans or programs have broad and comprehensive crisis communications/emergency info components to them. Why is that, particularly in the age of social convergence where people expect to be informed within minutes?


The recent event in Slave Lake where wildfires have basically wipe nearly half the town and chased its residents out, is a good case in point. I don't pretend to know everything that happened there but with lots of media coverage, a certain picture emerges in my mind at least. Here are a couple of excerpts from a recent story in the National Post.

“Learning about evacuation routes, learning about predicting where the winds might blow and who needs to evacuate and what kind of structures should be allowable in the path of these things and educating the public beforehand about what to do if such and such happens, I think are all lessons to be applied."
Brian Schwartz, director of emergency management support at the Ontario Agency for Health Protection and Promotion.

You can easily see in the quote above that it's important to do risk communications before any incidents as part of your EM program and preparedness initiatives. But does that translate to effective EI planning during a crisis?  Another quote from the same article:


“Communication is one of the primary things that is required in order for the emergency management plan to be flawless, and it never is.”
Richard Kinchlea,  director of operations at the Canadian Centre for Emergency Preparedness


I believe that things have moved so far in the recent years that public alerting, warning systems and emergency information planning need to be integrated fully between the ops people and the PIOs. Things move that fast nowadays: you have minutes to follow up on initial alerts/warnings with info, primarily through social media.


So what happened in Slave Lake? There seems to have been a lot of confusion between municipal and provincial leaders. Confusion that led to delays in evacuations, false rumours flying about and limited public alerting leading to an outraged citizenry. Here's a telling segment of that article:


As the fire sparked over the weekend, Mayor Karina Pillay-Kinnee waited hours for the province to step in; when that didn't happen she called for the evacuation order herself. By that time, flames had consumed the local radio station and phone lines began to drop, making it harder to notify residents. The province is defending its late response, saying it couldn't utilize the public warning system because Lake FM's broadcast feed was down.


Let's look at what appears to be wrong here:

The employees of the burned down radio station certainly took SM to heart when they couldn't broadcast and turned to Facebook and the Web to help their listeners. Good work!
Really, in the end, it comes down to leadership. Leadership means looking at all components of EM planning and ensuring they're synchronized. What is important to avoid is confusion and sadly, that seems to be a general conclusion from the Slave Lake disaster.
Now we're in the recrimination and self-serving positioning phase:
Alberta’s top emergency agency now says it told Slave Lake’s mayor to evacuate the town, although fires had already closed the highways.That statement represents an about-face for the province on a disaster that left hundreds of families homeless and raises questions about whether key recommendations, made in the aftermath of the region’s last major fire, have been implemented.
So, perhaps, a couple of suggestions are in order. First, to all officials: social networks allow you to communicate directly with your audiences, bypassing media. It's really important where as many as 40 per cent of people don't read newspapers, don't watch TV news or listen to radio newscasts. They get their info on the web and through SM. 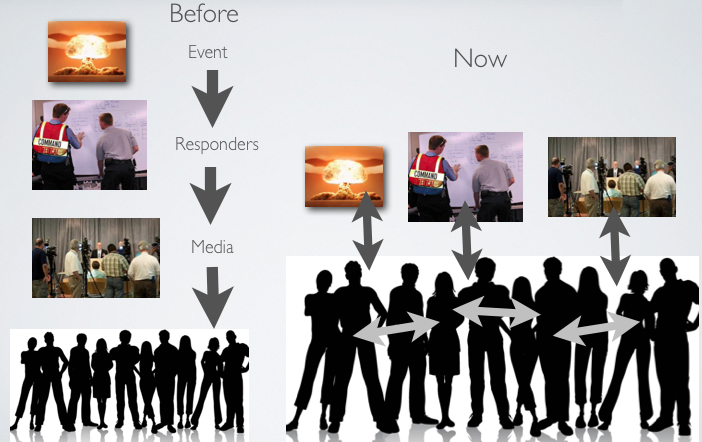 (image courtesy of Gerald Baron)
Second, emergency managers need to educate elected officials on what their role is in regards to the provision of EI. Some shine under the spotlight and relish the opportunity to demonstrate leadership publicly. Others show their leadership behind the scenes and let specialists handle most EI duties.
Both styles can be effective. Here's an example of a local mayor who used social media effectively during a similar disaster. Of course, that can be risky too. The official EI products and messages coming out of the PIO or JIC/EIC have to say the same thing that elected officials are saying on their own, and vice versa. That could be a challenge but what better hook to get senior officials interested in your plans than to build on their enthusiasm for SM and communications in general?
I look forward to your comments on this.
Posted by Patrice Cloutier at 7:15 PM