It's been a hard week for some big organizations on social networks. Many are learning that engaging online is a double-edged sword. But are there ways to mitigate the risks? I propose to show a few.

First, Air Canada went through some difficulties when one of their baggage handlers was caught on camera throwing luggage around ....

I put together a storify piece on this whole mess. But how did Air Canada do overall in their crisis comms response? The answer ... a fair job at best.

What they should have done:

Second is a story of a campaign gone wrong. In Ontario, we have a cartel of foreign beer companies controlling beer sales ... The Beer Store. Pressure is now on to allow the sale of beer and wine in corner/convenience store (a shocker really .... this would cause the end of Ontario who'd become like Québec where such sales happen: cool, hip and fun !  ... but I digress. )

The problem is that whoever is advising the Beer Store made them overplay their hands with really obnoxious TV ads. Ads that border on equating store owners with predators ... Not reflective of the reality at all:

They also had a twitter hashtag #ONbeerfacts .... Well, let's just say that things backfired there as well:

@ONBeerFacts aren't fooling anyone with their ridiculous ads. Scaremongering at it's finest. #ONBEERFACTS

#ONbeerfacts. Thank you for promoting your extortion of Ontarians

Here's an interesting Storify on the whole deal. And the reaction is not any better on the Beer Store's Facebook page.

What could they have done instead?
Finally, the week was topped up by the #myNYPD fiasco.

What were they thinking? They must surely know that the NYPD's reputation has been tarnished since the whole Occupy movement took to the streets?

While wanting to engage online is a noble idea (and some think it wasn't all bad ....) ... you've got to know how to pick your battles. This is not about judging how police behave in general ... or a discussion on the validity of accusations of widespread police brutality ... rather it's a question of evaluating the public perception before launching such an online campaign.

To say the results are not what the NYPD expected is a gigantic understatement. The twitter stream was inundated with images like this one: 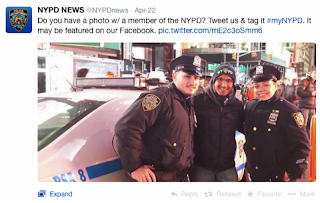 What could have done better:?
What they have done right? Promise to stay the course and keep engaging on social networks. That's great and i'm sure they'll learn from that particular lesson.

In the meantime, it's been a huge train wreck that has caused other police services from around the US and oversees as well, to become embroiled in the social crisis ...

Posted by Patrice Cloutier at 6:39 PM No comments:

I had the pleasure to be a panelist at a very interesting conference/workshop last week organized by the Canadian Forces College. The focus was on social media and national security.

I provided a short presentation on social convergence it deals with national security in its broadest definition: emergency and crisis management. This is in recognition that the highest duty for any government is to ensure the well being of its citizens.

Here are some observations I made during the two day meeting:

Training the modern-day PIO ... what should he/she know?

There is no doubt that social convergence is putting extraordinary pressure on today's Public Information Officers (PIO) ... also called Emergency Information Officers (EIO)...btw: i prefer that term since no one should mistake the job for a PR gig ...). So what should an aspiring PIO be taught?

I believe the curriculum (and this applies for one-day crash seminars to full term courses) should be divided into three main tracks:

Lets first look at the EM requirements. You'd be surprised to find out how many people assigned to the role of PIO or EIO ... or to speak/coordinate emergency info for their agencies during crises/disasters ... have NO emergency management knowledge whatsoever.  So, what to learn?
Start with the basics:

Secondly, the PIO cannot effectively coordinate the planning/delivery of emergency information to the public if he/she doesn't have a solid understanding of how people access and process info during a crisis and how to communicate effectively. Hence the need to learn to use a crisis communications approach.

This includes matching crisis comms planning with an organization's hazard identification and risk analysis effort to ensure that what concerns the public (and therefore communicators) is not forgotten by the EM or BCP/COOP specialists. What does that mean? It means focusing on the five Ps :
Finally, social networks and related technology is the big force behind the changes in the PIO world and in crisis communications. From the evolving tech in the EOC, and in the field (as used by first responders) to innovative tech in the media ...It should all matter to the PIO especially how mobile devices keep evolving.

At the most basic level, it means getting familiar with the most popular social networking platforms.

It also means keeping up with alerting and notification tools (most of which now include social networks and mobile platforms) and crowdsourced platforms that allow for a better comprehension of how an incident evolves (crisis mapping, validation tools, etc). That's where the social monitoring (or listening) component comes in.

Social media monitoring is now at the heart of the considerations that PIO face during incidents. From deciding who should do it ... to how to operationalize social data ... that element alone is enough to keep most PIOs busy for a long time.

So, what do you think that new PIOs/EIOs should be learning?
Posted by Patrice Cloutier at 6:34 PM No comments: