in addition, social convergence (mobile tech + social networks) means that someone is always watching you ... or at least has the mean to tape (videotape too) what you're doing ... catch their actions for posterity.

There is no way to avoid crises ... people make mistakes, have lapses of judgment ... and they get caught on tape or called out online.
Nothing goes unseen today ...well not much ... the most fleeting, embarrassing moment can come back to haunt you. This briefest of movement of one finger, caused a fire chief to publicly apologize.

Now, when you do something dumb in a deliberate manner, in front of cameras ... then you're asking for trouble:
Okay ... that's once right ? People learn from their mistakes ... don't do something stupid like that again ? ... Well, it would seem not in every case ... read this account of a second troubling incident involving the now infamous "badge 728.

You know you're really in trouble when your boss has to apologize on your behalf and behalf of the whole organization:

Online mistakes can equally be as painful:

StubHub @StubHub
We've deleted an unauthorized tweet made from this Twitter handle. We apologize to all of our followers for the inappropriate language used.

A fantastic top 20 list of online/social media mistakes can be found here.

A few of lessons here:


Your people are human ... they will make mistakes ... the best way to counter them is to adopt a human approach.

It worked well for the American Red Cross. 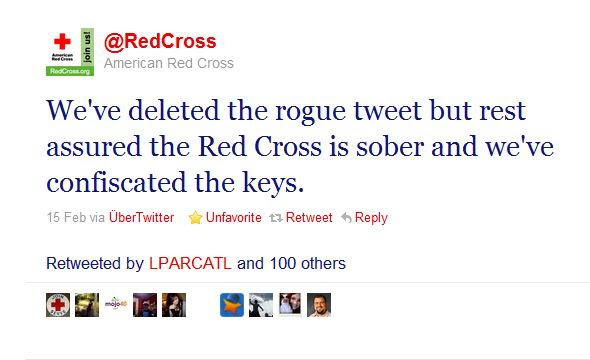 Some other good examples of how to handle mistakes or crisis on social media. We're in a brand new connected world ...we're all watching ...waiting for the next person to falter publicly ...
Posted by Patrice Cloutier at 8:08 PM