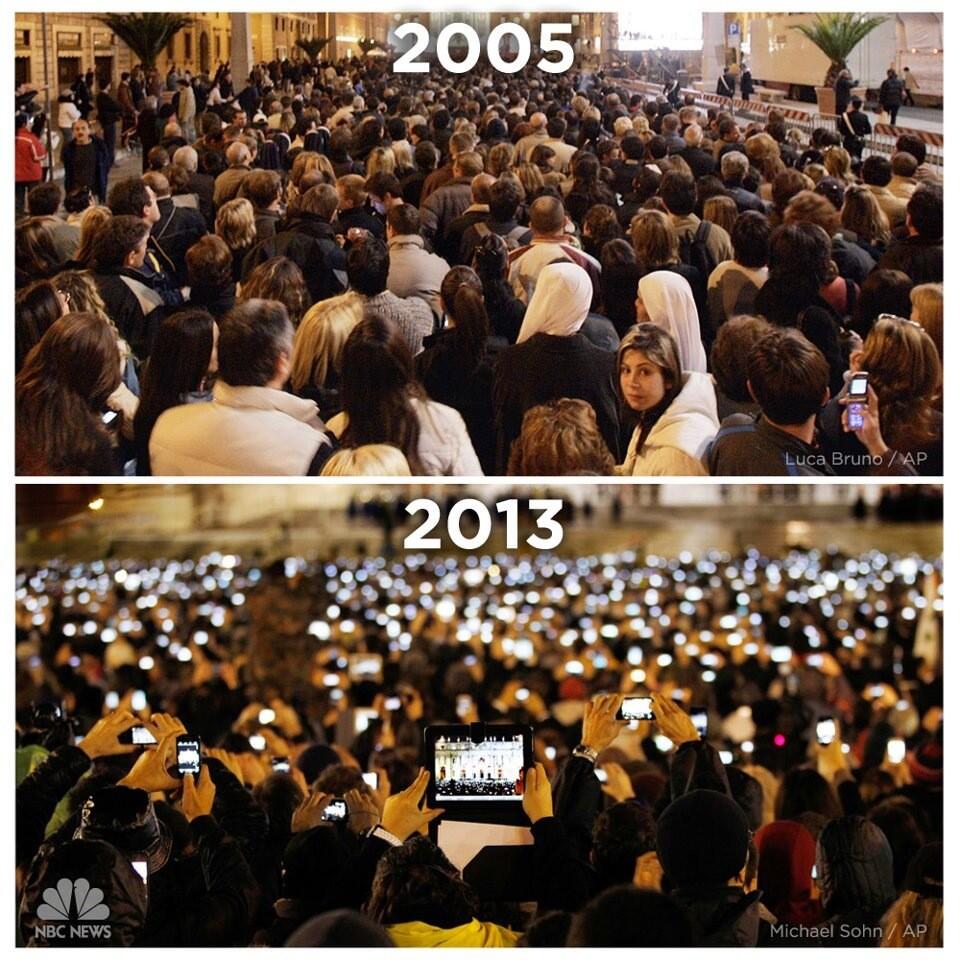 We were reminded once again yesterday, of the omnipresent nature of social convergence (mobile tech + social networks) and how news travels. This great picture (thanks +Jim Aleski) really illustrates that reality. Thousand of people in St. Peter's Square, shoving their mobile devices in the air for a snapshot of history in the making. (NOTE: it now seems the picture itself might not be what it seems.)

Historical events and disasters are now captured and shared instantly. All this has happened in the last few years and the consequences for emergency managers and crisis communicators are immense.

I've talked before about what social convergence means for emergency managers. It's really up to us to use this phenomenon and improve our collective intelligence as we respond to disasters. There are now many apps/systems out there that allow for crowdsourcing damage assessments and reports of all kinds. There are data validation issues but they shouldn't deter agencies from expanding their situational awareness posture.

But social convergence is not quite without perils, for EM and crisis communications practitioners. In particular, our planning must now integrate social networks ... both as useful tools and as possible threats.

I've written in the past about the threat to brands/organizations posed by "brandjacking" or parody accounts on social media. Well, it seems, not even the new Pontiff is immune to that unholy practice. Many news organizations, and thousands upon thousands of tweeps got fooled by a parody account who grew from 5,000 followers to over 100K in just a few hours yesterday.

Maybe a closer look at previous tweets would have revealed the hoax earlier. Here's an excerpt from the Mashable piece (link in the above paragraph):

@JMBergoglio first tweeted last April, and many of the profile's earlier tweets reveal it to be a farce. The fact that most tweets are written in Spanish surely added to the confusion, but check out these translations:

"If I'm the new pope, children will love me more than the Santa Claus," it reads in English.

Now, it turns out the real Pope is on Twitter (probably a younger Monsignor at the Vatican) and already has a pretty good Facebook follower count ... So some SM savvy for the new Pontiff ....


A lesson here ... note the "verified" check mark beside the Twitter handle. Do you have one of these? How prepared are you to ensure that if someone usurps your identity on social networks. Think of BP soon after the Gulf Oil spill (funny stuff here) .... and it's PR nightmare amplified by a Twitter parody account).

First, you must be in a position to know someone is posing as you. Are you conducting ongoing social media listening and web monitoring on a routine basis? Can you ramp it up in a crisis? Those questions must now be answered in any crisis comms and emergency information plan.

I'd suggest getting to those answers before the white smoke fully dissipates over the Vatican ... or Habemus Crisis ...
Posted by Patrice Cloutier at 5:27 PM