A painful goodbye to a friend ...

This blog most often deals with issues related to social media, emergency management and crisis communications. Every so often, I also look at geo-strategic/geo-political issues to give perspective. But most often, I stay the course and relate everything to what i focus on.

But recent events have made even that difficult. 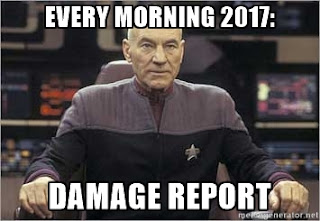 The news are just astounding. Viewed from Canada, the situation in the US is a bit like seeing your best friend's personality change ... and not for the better. A close buddy who's become withdrawn, moody and lashes out at any perceived slight or injustice.

I hope I'm wrong but I think our American friends are in for a bitter four years ... a period of chaos from which they may not emerge from ... in the end, that may be EXACTLY what Trump and his neo-nazi gang may be hoping for. This post was scary in its relevance.

By sowing chaos, spurring protests and causing a general upheaval in the civil process that has marked the US as a beacon of hope for the world, Trump is following a game plan laid out decades ago by fascists of all stripes.

His actions are creating a void ... he's benefiting from recent developments and exploiting trends ... all that in his favour. Let's examine 10 of them :

I'm probably overly worried ... and things won't deteriorate ... All I can say is that I hope I'm wrong.
If I'm not, the world will have lost a historical symbol of hope, freedom and opportunity ...and I think that Canada will have to take up even more of that mantle ...

Posted by Patrice Cloutier at 7:21 PM